TRACFIRE - Fires and domestic burning : what's the impact on the western Mediterranean Sea

TRACFIRE aims to assess the origin and the age of burning biomass tracers such as anhydrosugars using wet chemistry and compound specific isotopic measurements (d13C, D14C) on individual molecules (levoglucosan) emitted from domestic burning, fires or other biogenic sources and are important contributors to the carbonaceous fraction of the airborne particles.

The same analyses will be performed in the surface seawater (high molecular weight dissolved organic matter) to assess the origin of levoglucosan (d13C evoglucosan terrestrial vs marine ?) and provide evidence about its eventual transport from land to sea.

Molecular 13 C and 14C analyses will be performed using an EA-IRMS and EA-AixMICADAS, respectively (facilities available at the CEREGE). 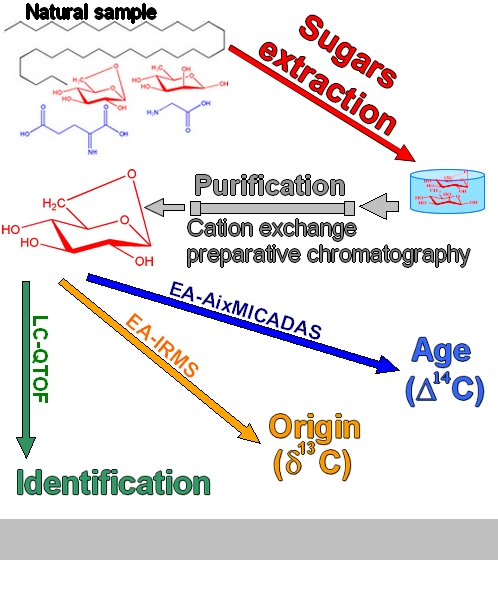 The obtained results revealed that for the marine particulate organic matter (POM) sample, the δ13C values of the individual carbohydrates ranged from −18.5 to −16.8‰, except for levoglucosan and mannosan, which presented values of −27.2  and −26.2‰, respectively.

For the total suspended atmopsheric particle (TSP) sample, the δ13C values ranged from −26.4 to −25.0‰. The galactose and glucose D14C values were 19 and 43‰, respectively, for the POM sample. On the other hand, the levoglucosan radiocarbon value was 33‰ for the TSP sample.